On this website you can find basic information on my research, publications, projects, lectures, and teaching (including a cv).

TRANSPACIFIC
The Structure and Impact of Trans-Pacific Trade, 16th to 18th Centuries: The Manila Galleon Trade Beyond Silver and Silks

With an interdisciplinary team, comprising specialists in Chinese, Japanese, Latin American, Southeast Asian, economic, environmental, and medical history, maritime archaeology, and geographical sciences, this project will, for the first time, systematically investigate the roles of actors, objects, side-effects, and exchanges that were ‘invisible’ or marginal to conventional histories of the Manila Galleon trade (1565 to 1815). It will also examine informal trade routes and networks in this trans-Pacific trade connection, concentrating on the 16th to 18th centuries. To achieve this goal, TRANSPACIFIC will expand upon the structure and impacts of contraband, informal, accidental, and undesired exchanges of cargoes, people, knowledge, technologies, and diseases across the Pacific, to evaluate, first, the complexity, nature, and degree of the global interconnectivity of Asian and European sub-regional networks, and, second, to reassess both their positive and negative impacts on trans-Pacific trade generally, and on indigenous actors and societies in China, Japan, and the Viceroyalty of Peru specifically.

Our research focus lies on the investigation of interaction, communication and exchange relations in the macro-region of Eurasia, East Asia, the Asia-Pacific and Indian Ocean Worlds across both land and sea routes, with a main focus on China. We concentrate, however, especially on China’s multifold maritime relations. Major emphasis in this context is placed on the history of diplomatic relations, the transfer of science and technologies, commodity and product exchange, trade, cultural aspects in their widest interpretation, religions, as well as migration and the organisation and functioning of networks.

For this purpose, we have established a worldwide team of researchers who analyse continental and maritime exchanges and transfers of knowledge, ideas, products and people, including forms of migration, paying particular attention to unofficial, secret and illegal exchanges and movements. To this end, we particularly investigate forms of interaction that have been important in both the past and the present, focussing especially on illegal and private networks (smuggling, piracy etc.).

Of major importance to our research is also a critical analysis of China’s and other polities’ socio-economic structures, including the interrelationship between politics, ideology & morality, as expressed in cultural traditions, texts, and religious practices (such as for example tomb culture; Confucianism etc.).

Research includes, above all, commercial exchange and networks, the exchange of technologies and science transfer (such as geographical knowledge as portrayed in maps; navigation routes, distillation technologies, use of mercury for silver mining, medicinal knowledge and products, including diseases, etc.); diplomatic exchanges; aspects of culture (such as practices of Chinese-foreign encounters; food & drinks, music, tombs and tomb objects, including murals; ship cargoes) and religions (such as Buddhism, Christianity, and Islam); and historical naval enterprises and maritime commerce.

A milestone of our research lies in the parallel comparative analysis of both archaeological and textual evidence and a cross-cultural inter-disciplinary approach. In terms of archaeology, my own main focus lies on the analysis of both tombs and shipwrecks. The use of a wide range of sources from archaeological findings to texts, documents, and pictorial material, to linguistic evidence, constitutes a hallmark of the approach.

END_OF_DOCUMENT_TOKEN_TO_BE_REPLACED

This international workshop will bring together specialists working on various aspects of China’s maritime history, focusing on its historical relations to neighboring or distant countries and oceanic spaces. We will concentrate on two thematical chapters, (1) geographical knowledge, sea routes & navigation as the major precondition of seafaring, (2) on coastal defence and piracy as major consequences of seafaring activities, and otherwise divide the papers according to oceanic spaces, that is, China’s relations with (i) East and Southeast Asian countries, (ii) with the larger Indian Ocean World, and (iii) with the Asia-Pacific macro-region. The workshop seeks to enlarge our knowledge on China’s rich history of maritime relations.

Selection of recent most important publications

END_OF_DOCUMENT_TOKEN_TO_BE_REPLACED

Prof. Dr. Angela Schottenhammer is part of a multi-disciplinary, international team of scholars under the directorship of Professor Gwyn Campbell of McGill University that has been awarded a $2.5 million partnership grant funded by the Social Sciences and Humanities Research Council of Canada (SSHRC) to investigate six periods of historical and contemporary environmental (e.g. climate change, volcanism, monsoons, cyclones, drought) and human (e.g. famine, disease, conflict, migration) crisis, in order to elucidate past-to-to-present patterns that will help inform current and future risk preparedness and socio-human responses to environmental crises and disasters.

The Indian Ocean world (IOW), a macro-region stretching from Africa to China, is a significant global socio-ecological system. Factors such as climate change, the monsoon system, El Niño Southern Oscillation, and volcanism, have profoundly affected its history. Moreover, it contains 17 of the 20 countries most at risk from global warming and associated rising sea levels, and increasing frequency and intensity of drought, famine, conflict over scarce natural resources, and human migration.

This research project applies a conceptual-analytical methodology designed to bridge the boundaries between social and natural sciences. Adopting Fernand Braudel’s view that conventional frameworks of historical analysis are inadequate as analytical tools because they largely ignore both environmental factors and natural cycles and related temporal spans, project members will interrogate, on macro and micro levels, the relationship between clusters of unfavourable environmental events and adverse historical tipping points.

“Maritime disasters and shipwrecks of Manila galleons in the East and Southeast Asian waters”, MARITIME KNOWLEDGE FOR ASIAN SEAS. An interdisciplinary dialogue   between maritime historians and archaeologists, Paris, EFEO, EHESS, 21.-23.11.18 (21.11.18)

Crossroads – History of Interactions across the Silk Routes

This series focuses on the manifold commercial, human, political-diplomatic and scientific interactions that took place across the continental (overland) and maritime Silk Routes. This includes exchanges of ideas, knowledge, religions, and the transfer of cultural traditions, including forms of migration. Geographically speaking the series covers networks (or routes) across the Eurasian continent, the broader Indian Ocean (from East Asia as far as Africa), and the Asia-Pacific world, that is, trans-Pacific connections from Asia to the American continent. A special interest lies on the history of science and technology and knowledge transfer along and across these routes. We focus particularly on historical topics but contemporary studies are also welcome.

You can find this series onlineon the website of Brill. Furthermore, Brill also offers a PDF flyer for information on the series.

“China and the Maritime Silk Routes: The Role of China’s Contacts with the Asia-Pacific and the Viceroyalty of Peru in Early Modern Times”, Hong Kong University of Science and Technology (HKUST) (26.11.18)

The „Indo-Pacific“ Crossroads: The Asian Waters as Conduits of Knowledge, People, Cargoes, and Technologies: 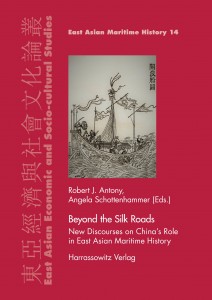